Ahh The Strand… a must-see part of Galveston’s Historical District filled with several dining options and a countless number of stores. Who wouldn’t want to visit it?

Of all the amazing sights and stores there are, we absolutely must focus on the dining options, two in particular: Hubcap Grill and Yagas Café. Both of these establishments provide you with excellent food and great service, however there is one I would prefer rather than the other and today we will discuss why that is. 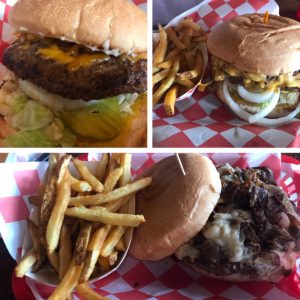 The Hubcap Grill is known for their award winning burgers.  In my opinion, The Hubcap Grill is not the most inviting place when you walk in. The place is old and has no insulation, so it is very hot in there. The restrooms and dining area didn’t look very clean. The host, however was a very nice man. The restaurant doesn’t have any servers, so when you know what you want you order at the bar.

As for the menu, it mainly consisted of several types of burgers and fries, so the overall food diversity wasn’t really there. We all ordered burgers (due to the fact that it as the only thing on the menu) and were quite satisfied with them. They were a tad bit greasier than we would have preferred, but overall, they were delicious and almost made up for the lack of airflow and cleanliness.

As for drinks, they offer seasonal craft and imported beers as well as cocktails. My mother ordered a cocktail while my father ordered a beer. He was satisfied with his beer; however, my mother wasn’t too thrilled with hers.

Her margarita on the rocks had too much lime in it without enough alcohol. The bartender made her a new drink but this time the margarita was full of alcohol and practically nothing else.  So if you are looking for a fancy cocktail, this is not the place.

Yagas Café is another restaurant I ate at during my visit to The Strand. The establishment was very inviting and clean.  the service was awesome! As I stared at the menu, I was overwhelmed with the diversity of American food choices. They had:

The choices are literally endless. What also made this place great is that they have a ton of Gluten Free options on the menu!

As for alcoholic beverages, there are many frozen drinks to chose from as well as over 40 different beers. My mother ordered the Dirty monkey, which contains coconut rum, pineapple juice, coffee liqueur, coconut nectar and bananas. She loved it! My father ordered a craft beer and drank all of it on one gulp!

As for the food, we ordered burgers and pizza. The burgers were a perfect amount of tender and juicy without too much grease and the pizzas were probably some of the best I’ve ever had!

Which one was best?

I’m sure you can guess, but I’ll tell you anyway; Yagas Café won my heart over the Hubcap Grill.

Their variety of food, drinks and service  really set them over the top as well as the overall inviting mood of the servers and the restaurant itself.

Even though I did prefer one over the other, don’t let this article prevent you from trying out both restaurants. Who knows, you may like both of them but you will never know if you don’t try!

Imagine spending time with your family in a BEACHFRONT property: